The map layout bears similarities to MAP26: The Abandoned Mines from Doom II, and is notable for being the only stage in Plutonia which uses an exit switch instead of the black teleport pad (though there is one at the base of the switch that the player will teleport on top of). 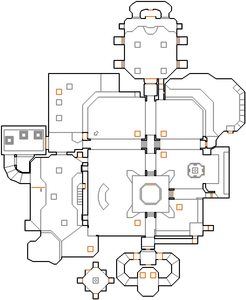 Map of Caged
Letters in italics refer to marked spots on the map. Sector, thing, and linedef numbers in boldface are secrets which count toward the end-of-level tally.

You will be in a room with four raised teleporters and a switch. Hit the switch and walk into any teleporter. You will be in a small room with an armor, a super shotgun, shotgun shells and another switch. Hit the switch and the room will lower, revealing a larger area. The platform you are on has a bridge running south, a bridge running east, and a bridge going north, which has a bridge going east to west crossing it. Each bridge has barred walls except for the platform you are on. In the southwest portion of the room is a small raised platform with two revenants and a supercharge, surrounded by nukage and spectres. On the north side of this room is a yellow key door, and on the south side is the exit door, which is locked.

Go forward, and go west along the bridge, onto a platform next to a pit with nukage and demons. Go west through a room, raising chaingunners which cannot see you at the moment. Go through the southern door, through a hallway, leading to a switch. Kill the revenants then activate the switch, which will raise stairs on the east side of the room you are on. Go back through the hallway, and you will be ambushed by Hell knights, and the chaingunners which could not see you previously. After the fight, go back into the room just east of the one you are in right now. There will be a switch on the northeastern wall of the platform you are on. Hit it, and the wall will rise, revealing a path to the yellow keycard. Grab the key and go to the yellow key door.

Go back to the platform you started on in the big room, and go east along the bridge, and turn south, coming to two doors. One door has a lever, which lowers itself, revealing a teleporter. Step on it, and you will be in the western room next to the stairs you raised earlier. Climb them, then hit the switch, revealing three mancubi on the southwestern part of the room, guarding a blue keycard. Kill the baddies, get the key, and jump on a teleporter, which will take you to the center of the two bridges in the main room.

Go east through the blue key door, and climb the stairs across the pit to your right. Hit the switch at the top, which will open the exit door. Go through it and hit the switch, lowering the east and west walls, revealing commandos. Kill them, then go through either hallway, leading to a room with three shotgun guys, a red teleporter pad, and a silver teleporter pad. Kill the zombies, step on the silver pad, and hit the exit switch.