MAP04: Cargo Transfer is the fourth map of Simplicity. It was designed by Melissa McGee (Agent Spork) and uses the music track "Demons on the Prey", originally composed by Robert Prince for Doom. The par time defined in MAPINFO is 3:30. 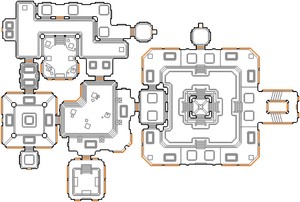 Map of Cargo Transfer
Letters in italics refer to marked spots on the map. Sector, thing, and linedef numbers in boldface are secrets which count toward the end-of-level tally.

Take the shotgun and chaingun on your left and use them to kill two imps waiting at the top of the stairs, then open the door and step back to avoid two demons that teleport behind you. Dispose of the imps and shotgun guys in the storage area ahead, then open the east door and kill one or two chaingunners waiting behind it along with a couple of demons to the sides. The east area of the map is a pit containing cacodemons (plus two arachnotrons on Hurt Me Plenty (HMP) skill level and two lost souls on Ultra-Violence and Nightmare) surrounded by a circular walkway - follow the walkway round to its east side to find a super shotgun, then continue east to find a switch that will open the building in the center of the pit and reveal more cacodemons guarding the yellow keycard. Kill the cacodemons along with imps, shotgun guys and revenants that teleport in, then go inside the building and flip the switch on the yellow key pedestal to lower it.

With the yellow key, open the north door and enter the teleporter behind it then kill two demons in front of you before opening the next door to enter a windowed hallway. Kill the imps and shotgun guys ahead then follow the hallway west to another door, open it and turn right to see a switch ahead guarded by two Hell knights; flipping the switch will open a second door opposite the door you just walked through, allowing you to push past revenants, imps, shotgun guys and chaingunners to reach the red keycard. Take the key then go back to the switch you just flipped and walk south to a red key door, open it to confront two demons then open the next door to enter an apparently empty chamber. Flip the switch on the west wall to open the center column and reveal one or two arch-viles, along with zombiemen and shotgun guys that teleport in; after killing the arch-viles, head through the open south door and flip the switch behind it to end the level.

* The vertex count without the effect of node building is 3467.

This level contains the following numbers of things per skill level, not including enemies spawned via Thing_Spawn or similar functions: