MAP04: Castle Klattakus is the fourth map of Hexen Upstart Mapping Project. It was designed by DynamiteKaitorn and uses the music track "Winnowing Hall" by Kevin Schilder. 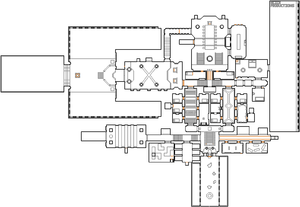 Map of Castle Klattakus
Letters in italics refer to marked spots on the map. Sector, thing, and linedef numbers in boldface are secrets.

Turn left as the level starts to dispose of two ettins, then head down the steps in the north-east corner of the room and go round the bend to find (for mage players) Frost Shards; watch out for a brown chaos serpent that teleports behind you as you pass this point. Head forward into a dining hall (cleric players will find a Serpent Staff on the table), then open either of the doors in the east wall to enter the kitchen where you will see three switches on the north wall (fighter players will also find Timon's Axe here). Only the east switch needs to be pressed; after doing so, return to the dining room and head up either of the south staircases then go through a tunnel in front of you to find two more staircases leading east or west.

Go up the east staircase and walk all the way to the end of the hallway, then open the doors on your right to enter a bathroom where an ettin guards a moon switch. Press the switch then go back to the top of the stairs and open the doors on your left to enter a hall with a brown and/or green chaos serpent. Open the doors at the far end of the hall and turn right to enter a room with another staircase, drop down to the floor below then enter the east hallway and open one of the first two doors on your right to enter a small library with (depending on skill level) ettins, a centaur and afrit or dark bishops. Press the moon switch in the south-east corner of the library then go back to the staircase and pass through the south door that has now opened. Kill the two approaching afrits then take the castle key sitting between them.

Picking up the castle key will cause the floor to fall away; kill two more afrits that are released behind you then carefully jump across the platforms that have been left behind to get back to the staircase room. Gray bars have risen around the staircase to block your way back up - go into the west hallway this time and look through the open door on your left to see (depending on skill level) ettins, centaurs, bishops or wendigos guarding a teleporter. Enter the teleporter to get back to the top of the blocked staircase, then head north through either of the wide hallways (which now contain crushers and a lethal pit) to get back to the dining room area. Retrace your steps to the starting room, dodging the dart traps that have been activated here, and make your way to the north-west corner of the room to find a keyhole. Use the keyhole to reveal a chain switch and pull it to open the nearby door and get outside, where serpents and slaughtaurs (plus bishops on medium skill level, and reivers on hard) are guarding a teleporter that leads back to MAP02: Garden of Torture.

The (absence of) data was last verified in its entirety on February 19, 2022.

* The vertex count without the effect of node building is 3649.