MAP04: Cave of Death (All Hell is Breaking Loose)

MAP04: Cave of Death is the fourth map of All Hell is Breaking Loose. It was designed by Michael Niggel (Risen) and Chris Niggel (Kamikazi) and uses the music track "Retribute" by Mark Klem. 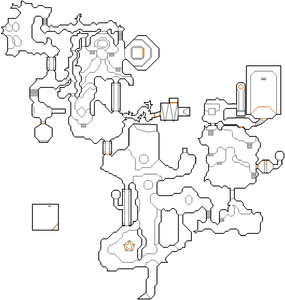 Map of Cave of Death
Letters in italics refer to marked spots on the map. Sector, thing, and linedef numbers in boldface are secrets which count toward the end-of-level tally.

* The vertex count without the effect of node building is 1432.

"Chris brought the request for a level back from chool [sic], and I decided to tackle it. I had a cave level in progress, and it seemed to fit with the conversion's theme, so I converted it and sent it to the lead producer. It became MAP04, and I think it was one of the better levels in the PC."
― Michael Niggel (Risen) [1]