MAP04: Combine is the fourth map of PlayStation Final Doom, and the fourth map of the Master Levels episode. It is based on the PC version of MAP01: The Combine from the Master Levels for Doom II, with modifications to accommodate the PlayStation's framerate and storage capacity limitations and add enhancements such as colored lighting. It uses the music track "Larva Circuits".

This level is known as The Combine on PC and its author was Christen Klie. Changes for the PlayStation port were authored by Tim Heydelaar.[1] 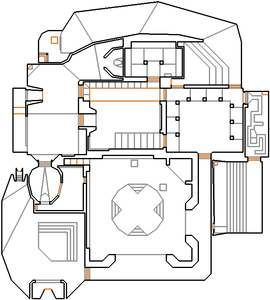 Map of Combine
Letters in italics refer to marked spots on the map. Sector, thing, and linedef numbers in boldface are secrets which count toward the end-of-level tally.