MAP04: Come On In (Cyberdreams)

MAP04: Come On In is the fourth map of Cyberdreams. It was designed by Gonzalo Pérez de la Ossa. 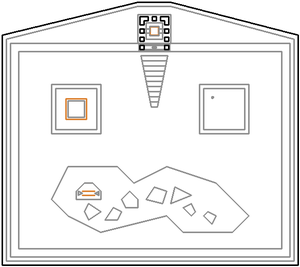 Map of Come On In
Letters in italics refer to marked spots on the map. Sector numbers in boldface are secrets which count toward the end-of-level tally.

Your goal is to reach the gate at the south end, which involves going on top of the rocks. There are between one to five barrels on some of the rocks depending on your skill level, including at the gate. Head to the south end of the level and wait for the caged cyberdemon to shoot, then have him shoot the barrels. When you have a clear path, run up the rocks to the gate. When you go through the gate, the cyberdemon will leave his cage and teleport to the right where he will be immobilized. Stairs will rise at the north end, leading to the exit.

* The vertex count without the effect of node building is 250.