MAP04: Command Control is the fourth level of console versions of Doom, based on the original E1M4: Command Control with modifications made to adapt to consoles' limitations. It was converted by American McGee and originally designed by Tom Hall and John Romero. The map first appeared in Atari Jaguar version, and is additionally used in the 3DO, Sega 32X, Game Boy Advance, Sony PlayStation, and Sega Saturn versions. 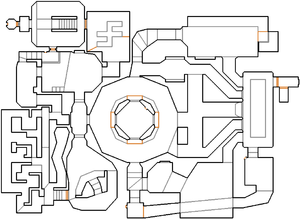 Blue key You begin in a short corridor, facing a door. Go through the door to a rectangular room with two corridors leaving it to the west. Go down the south corridor and follow it to a room with several barrels. Shoot or squeeze through them, then go west up a staircase to a round room with a central structure. The doors to the structure open automatically when you approach them - go inside and take the blue keycard. If the doors close before you leave the room, throw the switch on the north-east wall to open them again.

Yellow key and exit Leave the blue key area through the west exit and go south at the junction to a room with a raised metal ledge. Go south and open the blue door, behind which is a maze area. At the bottom of the staircase, go due north and turn right at the end of the corridor, then turn left and left again. You will enter a brighter room containing the yellow keycard, so pick it up by the window.

If you leave the rectangular room after the starting area through the north corridor, you will come to a room with a wide ledge holding a megaarmor pickup. You can get on to the ledge using the brown lift at the east end of the room - be careful, as when you step onto the ledge the wall behind you will open and release a number of monsters.

To the east of the exit staircase is a dark room with a blue flashing light. This room contains a box of rockets, but as you walk around the perimeter, you may trigger a trap where the central structure lowers to reveal several monsters, as well as a medikit and a second box of rockets.

In the PlayStation release, the sound data for lost souls spat from pain elementals is never loaded into memory on this map resulting in silent attacks of the lost souls (the death and the pain sounds are still preserved, with the former being identical to any projectile hit and the latter being pain state sound of the pain elemental).

Two shell pickups (Things 12 and 37) have no flags set for any of the three difficulty classes, so they do not actually appear in the level.

Numerous changes exist in the level compared to its PC version. The Jaguar port is based on v1.2 of the level, with additional changes made by the PlayStation port.