MAP04: Emerald Pools is the fourth level of Plutonia: Revisited Community Project. It was designed mainly by C30N9, with extra detailing by Josh Sealy (Joshy). It uses music track "Demons on the Prowl", by John Weekley (PRIMEVAL), a rearrangement of "Demons on the Prey" by Robert Prince, originally composed for Doom. The par time defined in MAPINFO is 2:00. 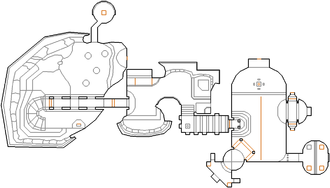 Map of Emerald Pools
Letters in italics refer to marked spots on the map. Sector, thing, and linedef numbers in boldface are secrets which count toward the end-of-level tally.

* The vertex count without the effect of node building is 1009.

This level is inspired by The Omen, the sixteenth level of The Plutonia Experiment. It was built in a day, using Doom Builder 2 and XWE.