MAP04: End Of Days is the fourth map of Deus Vult. It was designed by Huy "Doom Marine" Pham and uses the music track "Big Boss Blues" from Donkey Kong Country 3 by Eveline Novakovic. 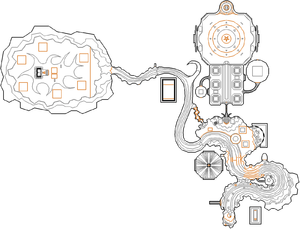 Map of End Of Days
Letters in italics refer to marked spots on the map. Sector, thing, and linedef numbers in boldface are secrets which count toward the end-of-level tally.

Four multiplayer-only berserk packs (Things 1928 through 1931) have no flags set for any of the three difficulty classes, so they do not actually appear in the level.

The teleport destination which is Thing 496 is not flagged on Easy difficulties, which means that if a player on Hey, Not Too Rough or lower enters Secret #4 or falls into the lava south of the starting point, they will not be able to leave without using cheats.

* The vertex count without the effect of node building is 4654.