MAP04: Engineering is the fourth level of Icarus: Alien Vanguard. It was designed by Jim Lowell and uses the music track "Melting" by Jeremy Doyle. 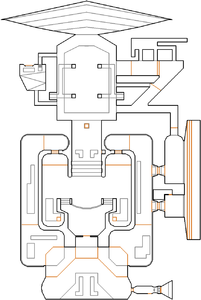 The door straight ahead that says "SIMU EXIT" is the exit, but you need the red key first. To your left are three lifts, take any one of them and proceed north as much as you can into a very large room. Go downstairs from there to reach a room with a red floor. Go around it to the left towards the broken vent and clamber into it. Proceed through it out another broken vent into a vine-covered room. Head for the stairs to the northeast and climb up to find a chaingunner and the red keycard. Backtrack to the exit, and then press on the panel furthest to the right to open the exit.

As with a number of other levels in Icarus featuring ship and simulation exits, you can perform a suicide exit in the exit room. However, the level's only rocket launcher is multiplayer-only, so you must use a monster. To do this, get the heavy weapon dude to attack you until you are nearly dead, open the exit room door, and then run toward the exit while he is shooting at you. With luck, you will be killed by a bullet mid-run while you are close to the barrier. If performed correctly, your body will slide under the barrier and into the simulation portal to end the level.