MAP04: Filth is the fourth map of Plutonia 2. It was designed by Fredrik Johansson, and uses the music track "The Imp's Song" by Robert Prince. The par time defined in MAPINFO is 2:00. 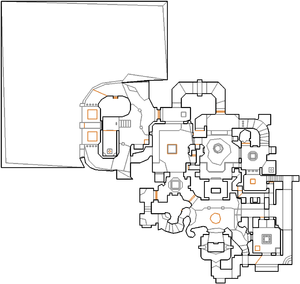 Map of Filth
Letters in italics refer to marked spots on the map. Sector, thing, and linedef numbers in boldface are secrets which count toward the end-of-level tally.

Get rid of the imps at the start and find the shotgun behind them. Doing so reveals a Hell knight in the room as well as a passage south of the shotgun. Go through this passage and follow the ledge to a lion switch, then go back to the starting room. Head down the stairs and you should reach the blue door and a switch. Since you do not have the blue key for now, flip the switch and the wall will lower so you can cross the muck. On the next ledge, go west through the door. Shoot the arachnotron, barrels, and zombiemen in the next room and take the door here. Follow the path until you find a switch, by flipping it, a platform will rise out of the filth, and you can cross to the south. From there, just follow the path, looking out for the demons (also do not fall into the nearby hole there, as it just leads into the muck which you do not need to head into right now). At the end of the path, you will find the blue keycard, and the bars will open where you will return to the starting point (look out for the arch-vile). Return to the blue door and open it, killing the revenants on the other side. Open the next blue door you come to as well. This area has the exit and a lot of monsters, so kill them. To progress, head around to the northern side of the area, and you will find the red door and some bars blocking off mancubi. Return to the previous hallway and look south, where you will see some pain elementals and lost souls. Inside there compartment, you will find the red skull key and some supplies. Go back to the red door you saw and flip the switch inside to lower the nearby bars. Run on the blocks and hit the next switch to raise up some stairs on the other side of the area. These stairs lead inside the building where you can exit.

To get the super shotgun in the southeast part of the map, from the ledge where you first enter the southern area, go east and up into the corridor. Head east and up the steps until you reach a switch. Flip it and a wall will open to the south, where you can see the super shotgun. You cannot reach it from where you are (where the radiation suit is), but you can reach it by going down the steps and through the opening next to it. When you jump through this opening the bars will open so you can retrieve the weapon.