MAP04: Fireworks is the fourth map of Requiem. It was designed by Matthias Worch, and uses the music track "Somewhere Over the Horizon" by Mark Klem.

Another outpost of hell, surrounded by a field of lava. Your mission is as simple as always: Don't die... 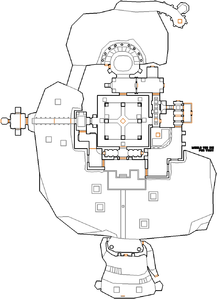 Map of Fireworks
Letters in italics refer to marked spots on the map. Sector, thing, and linedef numbers in boldface are secrets which count toward the end-of-level tally.

There are three doors at the top of the stairs here. Kill the zombies and take the central door. Inside, press the switch on the right, and then the switch on the left. This opens the bars ahead, and a Hell knight guards the entrance of the room with the lava in the center. Just go around this room to the northern door. Behind it, enter the room with the lava circle and press the switch to raise a staircase (look out for chaingunners). The stairs lead to a switch which opens bars nearby. Go through them and open the next door. At the end of the hall, hit the switch and return back to find the bars are closed again and a room with Hell knights is open. Kill them and press the switch at the end to open the bars again. Go back to the lava-filled central room to find the key is accessible. When you grab it, chaingunners will appear in the corners of the room. Now that you have the yellow skull key, return all the way back to the starting point and take the door with yellow markings on it. Kill the demons and go through the next door. In here, press the switch at the end to open a room with spectres and demons, and press the switch in their room to exit and open up a wall with the blue skull key. When you grab it you will teleport to a cavernous area with imps behind cages and spectres on the ground floor. Flip the switch at ground level to reveal Hell knights and an extra staircase upward. Go up the stairs and flip the switch here. Now return to the ground floor and head left and up, through the open door. You can see the starting point outside, but to get back, open the next door and flip the switch inside to raise a bridge to go back. Look out for cacodemons when you cross the bridge, and back at the start, take the left door with blue markings to continue. Follow this path, through the rooms and across the bridge to reach the final room. Attempting to reach the exit causes it to close for thirty seconds while pain elementals will try to harass you from the red walls. Fend them off, and then exit when the bars open. 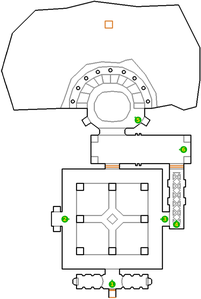 * The vertex count without the effect of node building is 2118.