MAP04: Fortress is the fourth map of The Twilight Zone. It was designed by Paul Corfiatis and uses the music track " ". The par time defined in MAPINFO is 1:00. 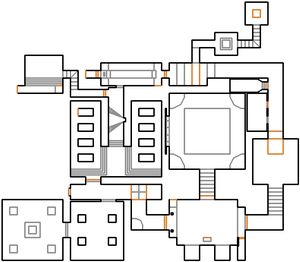 Map of Fortress
Letters in italics refer to marked spots on the map. Sector numbers in boldface are secrets which count toward the end-of-level tally.

A - At the start, go south up the staircase and you are in a room which has a switch raising up to the ceiling. On the western side of this room is a red key door, and on the NW side is a wooden barrier with red key markings on it which hides the red key switch. Press the green switch (as described first) in-between the cages to open a hidden door which heads eastwards. Progress through the door, up the stairs, down a lift and through a hallway that leads north then west. You will come to an area with red bricks where you can see the exit door and a red key in front of it. To the left of the entrance is a switch (A1) press it and go back to the red key door and on the right is a switch (A2) press it to raise the bridge (A3) and get the red key. The exit door requires the blue key.

B - Go through the red key door and down a lift, head west. There is a dark room in the SW which has a door (B5) that cannot be opened. Another door (B2) is also locked. Shoot the lava (B1) to open the door (B2). You are in a wooden library with eight bookshelves, four on each side. The bookshelf on the far NW side of the library contains a switch (B3) opens the door in the centre of the room. Progress through that door until you find a Hell knight and a switch (B4) which opens the door (B5). Head back south to that door and inside are four hanging Commander Keens. Kill them and the baron of Hell to get the blue key and progress back through the level to the exit. An arch-vile is behind the exit door so be extra careful.