MAP04: Granite Base is the fourth map of Doom 2 Unleashed. It was designed by Captain Toenail and uses a custom music track.

When using the music WAD included with this megawad, this level instead uses the music track "Gateway Blues" by Paul Corfiatis. 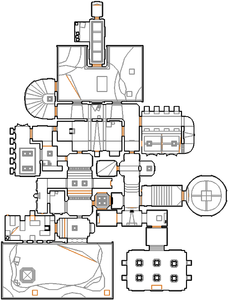 Map of Granite Base
Letters in italics refer to marked spots on the map. Sector, thing, and linedef numbers in boldface are secrets which count toward the end-of-level tally.

Head towards the large metal door in front of you, which will open automatically as you approach. Kill the waiting zombiemen then turn left and climb the steps to a door and pass through it, watching out for another monster that is revealed behind you. You will enter a room with crates - head for the north-west corner of the room to find a switch, watching out for demons and other monsters waiting to ambush you. Throw the switch then leave the room and turn left to go through a second door that has now opened. In the next hallway go forward and collect an armor pickup - you will be trapped between two sets of bars and will need to fight three demons that are revealed on your right. Once they are dead, flip the switch behind them to open a wall behind you and kill the imps that are revealed.

Go through the wall you just opened and head round the corner to find two demons guarding a switch. Press it to open the bars, then return to the hallway and head north through another door to a room with several monsters. Kill them then go through the east door, then through a second door in front of you to reach a fenced area. Follow the passage past several monsters, including a Hell knight, until you reach a brown room with a switch guarded by a second knight (bars will lower to block the doorway as you enter). When you approach the switch the wall on your right will lower and reveal four imps on I'm Too Young To Die (ITYTD) and Hey Not Too Rough (HNTR) skill levels, or four chaingunners on higher skill levels. Kill the enemies, take the yellow keycard that was sitting behind the wall then throw the switch to open the bars so you can escape.

Head back round the passage and go through the door, then turn left and go towards the smaller door in front of you. Go straight forward down some steps until you reach a silver column, then turn right to see a switch guarded by a cacodemon. Press it, kill the imps teleporting in behind you then go north-east through a door that has just opened. Turn left and press the switch on the west wall to raise a set of stairs. Climb the stairs and kill the zombies waiting at the top then go through the green door to enter a round room with three demons, along with two or three knights that teleport in. Kill the monsters then take the blue keycard near the east wall.

Go back down the stairs and return to the silver column you passed earlier, then turn left to enter the chamber where the imps teleported in earlier. Open the door here and kill two demons waiting behind it, then go through and head down the steps to a dark room with six columns. Take the chainsaw in the middle of the room then pick up the red keycard by the south wall, which will open four alcoves in the walls and cause a number of zombiemen, shotgun guys and chaingunners to teleport in. Fight them from the room entrance to avoid being surrounded.

Go back to the door which led to the yellow key, but this time go round the corner and follow the corridor past some zombies until you reach a door with blue key markings. Go through the door and follow the curved staircase past six demons to a door requiring the red key, then open it to get outside. Head towards the next door and several monsters will be revealed - imps joined by a cacodemon and a pain elemental, plus a revenant on Hurt Me Plenty (HMP) skill level or higher. Dispatch these enemies then head through the north door requiring the yellow key to face some zombies. Be careful when you approach the exit door on HMP or higher - there will be one revenant hiding behind a wall on your left, and another waiting behind the exit door. Approach a second door behind the exit door to finish the level.

Chainguns can be found in the room north of the hallway trap, and by the crates next to the exit door.

From the door leading to the yellow key, head south through a small door then look right to see another door. Behind this door is a room full of barrels and a single chaingunner - blow up the barrels (or let the chaingunner do so) and you will be able to reach an armor pickup, a shotgun, shotgun shells and a box of bullets.

* The vertex count without the effect of node building is 2544.