MAP04: Gulch is the fourth map of The Enigma Episode. It was designed by Jim Flynn and uses the music track " ". 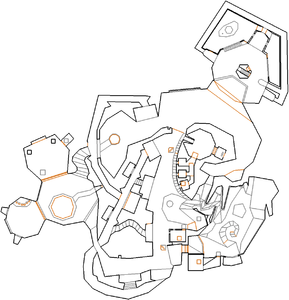 Map of Gulch
Letters in italics refer to marked spots on the map. Sector, thing, and linedef numbers in boldface are secrets which count toward the end-of-level tally.

Clean the are first at the start and collect some ammo. Go through the river on the left and keep moving until yo go into the next area, after a small waterfall. Instead of falling straight down, move carefully above the ledges. You'll see a little path with green, stone-like textures. Follow this path until you see a yellow skull on the right wall. In front of the skull is the yellow key. You will have to make a little jump to fall right over it and pick it up.

Now return to the waterfall where you came from. On the ground level, next to the elevator, there is a misaligned portal floor. In front of it there is a hidden door with a portal that will return you to the starting area. Once you are back at the start, to your left, towards the west, there is a hidden wall that you can press and behind the hidden wall there is a little hidden door. You will be in a red room where the mancubus was guarding. You can jump to the next area easily, aiming towards the south. Keep walking through the stone tunnels until you reach the middle point, where you will jump through a gap. To your right there is going to be stairs that lead to a mancubus room. In there there is a switch that activates the stairs to the exit room, you will see them clearly in front of you bu do not go there yet.

Keep moving unto the next section, in an area with a blue torch next to a red room. Take a left turn and keep moving until you see a skull switch. Hit it, it will lower the platform down the stairs. Go up the platform and look for a skull switch near the waterfall. Once you spot it, shoot it, it will open the next area and also reveal a lot of new enemies, including a spidermastermind.

In the next area, be careful not to pick up the single HP bonus, it is a bars-trap that will make you vulnerable and lock you for a some seconds. Go through a little ledge that connects the spidermastermind room. The blue key will be right next to the wall texture at the bottom. Once you pick it up, you will be teleported back to the waterfall area at the start. The stairs will be right in front of you. Simply follow the path and you will reach the exit door to finish the map.

* The vertex count without the effect of node building is 991.