MAP04: Hell's End is the fourth map in the DMP2013B.wad mapset of the Doomworld Mega Project 2013. It was designed by Fellowzdoomer and uses the music track "Nobody Told Me About Plutonia," originally composed by James Paddock (Jimmy) for Plutonia 2.

According to the author, the map was made on an Android device. Due to this, the map is bare and is not really visually appealing. It was inspired by Speed of Doom's final map, as there are an outrageous number of spawn cubes that shoot out, as well as 9 cyberdemons, 9 spider masterminds, and 8 cacodemons. The map can be beat legitimately with patience. 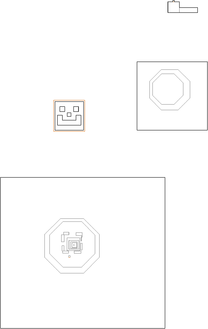 Map of Hell's End
Letters in italics refer to marked spots on the map. Sector numbers in boldface are secrets which count toward the end-of-level tally.

You start in a green and brown room. Turn left and grab everything you can get, then go through the wall texture. You will then be teleported into an arena that is red and brown, and surrounded by lava. Press the switch and wait for the pillar in the center to lower. Repeat this process two times, then kill the John Romero head.

There is a second arena in the map marked unsecret, and can only be accessed by Noclipping. The author scrapped this due to it being too small, but forgot to delete it.

This information was last verified in its entirety on March 19, 2015.

* The vertex count without the effect of node building is 233.