MAP04: Hell Mountain (No Rest for the Living)

MAP04: Hell Mountain is the fourth map of No Rest for the Living. It was designed by Russell Meakim and uses the music track "Shawn's Got The Shotgun". The par time is 1:45. In the version released as an official add-on, it utilises the red hellish sky of Doom II ("SKY3") instead of the default one featuring brown clouds ("SKY1"), thanks to DMAPINFO. 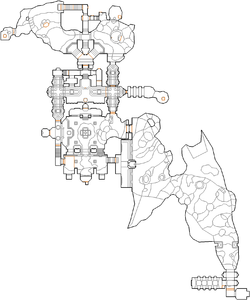 Map of Hell Mountain
Letters in italics refer to marked spots on the map. Sector, thing, and linedef numbers in boldface are secrets which count toward the end-of-level tally.

Walk forward to the marble building and open the big marble baron head. Get inside and open a door. Turn left, walk along, open three doors behind each other, jump down and take the yellow skull.

After taking the blue skull, turn left, open the blue door and go through the gate.

Touching the door right north of the yellow skull key opens a teleporter in the start room with the destination just behind that door. This new shortcut enables you to save up the invisibility sphere from secret #1 for a more efficient use inside the castle. In coop mode, in case a player dies and respawns at the map start, he can use the teleporter instead of walking again up to the castle.

There are only 7 intended secrets in Hell Mountain; the 8th secret is a mapping oversight in which one normal ground sector was inadvertently marked and released as secret. See here (archived 🏛) and here (archived 🏛). To collect this final "secret" simply walk over the sector like any other secret.

When pointed out to the maps creator, Russell "Castle" Meakim, he replied: