MAP04: Highway Holocaust is the fourth map of Ashes 2063. It was designed by Vostyok and uses the music track "Further" by John Weekley (PRIMEVAL). The par time defined in MAPINFO is 12:30. 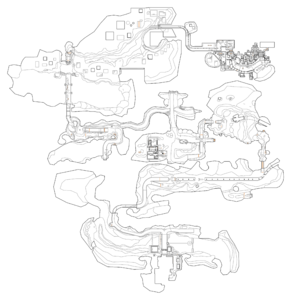 Map of Highway Holocaust
Letters in italics refer to marked spots on the map. Sector, thing, and linedef numbers in boldface are secrets which count toward the end-of-level tally.

Construction of this map had a troubled development cycle. Not only an ambitious concept (a driving section within a primarily action-focused episode), multiple technical and layout problems were encountered. At one point, the entire map had to be reorganized, as the original's immense size caused rendering and overflow errors in the engine at runtime. As a result, most of the route is now much more curved and winding than the original straight highways that would have featured instead.

The first secret on this map (signposted with a cacodemon shaped speed limit) as well as the accompanying vocal quote ("looks like someone went over the limit...") are a reference to the 20 Monsters Challenge community ZDoom forums mapping project (and subsequent instances of cheating and other tomfoolery), in which Vostyok submitted two maps for the final release.