MAP04: Isolated Outpost is the fourth map of 2048 Unleashed. It was designed by Malrionn and uses the music track "More" by Tom Mustaine. 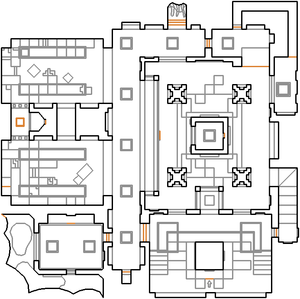 Map of Isolated Outpost
Letters in italics refer to marked spots on the map. Sector, thing, and linedef numbers in boldface are secrets which count toward the end-of-level tally.

Take the shotgun then go through the door ahead to enter a tan hallway and turn left to kill three zombies. Turn left again to see a cargo room containing two zombiemen, plus a Hell knight and two demons on Hurt Me Plenty (HMP) skill level or higher. Head west over the small boxes then turn right to see the yellow keycard in a small alcove - when you pick up the key a set of bars will close behind you and a demon will be released on your right (or a knight on HMP or higher), so kill it quickly then press the switch it was guarding to re-open the bars.

Go back to the tan hallway and head north, then go round a corner to see a small door ahead which requires the yellow key to open. Open the door and kill three shotgun guys and a chaingunner, then step off the lift to drop into a large chamber with two or three cacodemons. Flip the switch by the west wall to open a door behind you and reveal a knight (or an arch-vile on Ultra-Violence (UV) and Nightmare (NM) skill levels), as well as causing some demons to teleport in. Go through the door you just opened and press the switch behind it to finish the level.

Just before the yellow key door is a larger door with a red keycard behind it, which is used to open a door opposite the door from the starting room. Go through the door then head down the steps on your right to find one or two revenants guarding a terminal with an arrow pointing at it. Pressing this terminal will open a passage to the exit area.

A super shotgun can be found in a small passage between the cargo rooms.

* The vertex count without the effect of node building is 1296.