MAP04: Lost Beacon is the fourth map of Whispers of Satan. It was designed by Kristian Aro, and uses the music track "Phear No More" by Paul Corfiatis. 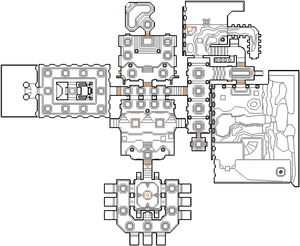 Map of Lost Beacon
Letters in italics refer to marked spots on the map. Sector, thing, and linedef numbers in boldface are secrets which count toward the end-of-level tally.

Open the door at the start and kill the zombies. Ignore the door on the left and continue right to two more doors. Take the right one to go outside. Kill the enemies here and climb the steps to the switch. Flip it, and watch out for enemies as you head back. Take the door you ignored before which should be open. In the next hall, a sewer-like area is branched off to the left, but the door there cannot be opened yet. The red door is to your right. Go straight down this hallway to the next room, which has a nukage river on the inner perimeter of it. Head into the middle of the room to find a switch to flip, but watch out for chaingunners who appear from behind when you flip it. Now head back to the previous hallway and into the sewer-like area as the door is now open. The yellow keycard is on a pillar; to get it, head around the wall behind it and find a switch. This lowers the key but when you pick it up, you reveal several monster closets. Head all the way back to the first hallway and to the right again, this time taking the yellow door on the left. Follow this path to a switch, press it and head back to find the red keycard. Watch out for teleporting monsters who appear, then head back to the red door you saw before. Kill the monsters in the room behind it, and head for the exit.

In the room to the far west with the nukage river surrounding most of it, you can retrieve a super shotgun just behind the wall where the switch is.

* The vertex count without the effect of node building is 4490.