MAP04: Metal Descendants is the fourth map of Sunder. It was designed by Insane_Gazebo and uses the music track "Double, Double, Toil and Trouble" originally composed by Guy Whitmore and Daniel Bernstein for Blood. 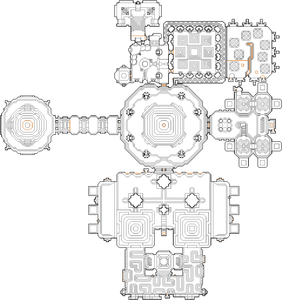 Map of Metal Descendants
Letters in italics refer to marked spots on the map. Sector, thing, and linedef numbers in boldface are secrets which count toward the end-of-level tally.

This map's main gimmick comes in the form of crushing ceilings that you will need to traverse. In some cases, you can lure the hordes of monsters underneath the crushers, allowing you to save ammo.

As always, pick up the green armor, ammo, and super shotgun, then open the door out of the starting room. The crusher in the middle of the room has a chaingun underneath it, and you will have to contend with a cyberdemon, two mancubi, two barons of Hell, and two revenants in this room. Take either door leading east to an arena with five crushers; the one in the middle containing a soul sphere. This will be a tough arena to conquer, and to start flip the northeast switch. You will need to flip four switches in this arena, but it will take a while before the next one becomes available. The moment you flip the first switch the cages around the arena will open revealing chaingunners. All the while, Hell knights will teleport in. Try to get rid of the chaingunners as soon as possible, using the crushers to injure the Hell knights as you wait for each switch to be revealed on the east wall. The last switch will open the doors back to the first courtyard.

Back in this courtyard, turn to the northeast and take this path, which leads around the cages where the chaingunners were. When you make it all the way around, flip the next switch, then return to the courtyard. Take the north path between the caged lamps for an arch-vile and an open door. In this room will be the rocket launcher and revenants in cages along with three crushers. Four barons of Hell will also teleport to the south side of this room. Once again, you will have to flip four switches, but you will not need to wait as long. The first switch is at the west wall, afterwards you will have to work clockwise until the fourth switch, which will reveal the yellow key. Go to the south side of this room to find a fifth switch, which will open doors back to the first courtyard. Hell knights and barons of Hell will teleport into this courtyard, so deal with them as necessary before taking the yellow door to the southeast.

The yellow door leads to the hub of the map, with an exceptionally large crusher in the middle of the hub. It is quiet here for now, so head to the west side and flip the switch. Get past the three crushers here to the next room where the plasma gun is located. You need to head into the middle here, getting past the large crusher to reach the switch in the middle. After flipping it, there are two more switches to press on the west wall, but these will take a while to lower. While they lower, you will be harassed by hordes of imps from the four teleporters. After you flip the northwest switch and the southwest switch, a switch to open the door out of here will appear. Flip it and head back to the hub. Now, the red key is in the middle, and you must pick it up underneath the huge crusher. Doing so opens up the eight columns around the huge crusher, in which Hell knights and revenants come pouring out. Again, use the huge crusher to your advantage, then go towards one of the eastern columns to find a red switch, which opens the door to the east.

This next part has you going across lava pits with crushers on them while dodging fireballs from the mancubi in cages. You will see the blue key as you go through this area. When you reach the teleporter, take it. This next part will be much harder, as you will have to cross several platforms all of which have crushers on them. As soon as you reach the platform with the soul sphere, several cages open on the perimeters, revealing chaingunners. Get rid of them and make your way to the energy cell pack. The teleporter will take you straight to the blue key. A cyberdemon will appear near the entrance of this area.

Return to the hub and take the blue door for the final challenge of the map. This arena contains two huge crushers at the sides, while a maze of crushers exists in the pathways behind those crushers. A spider mastermind is on a raised platform here along with some medikits. To the south of this platform is a teleporter, which takes you to the northern part of the arena, handy for a quick escape. The first switch you need is northeast of this teleporter, which will open up the huge side walls of the map revealing revenants, Hell knights, and mancubi in cages. Other Hell knights will warp in at the southwestern and southeastern teleporters, where they will likely get caught up in the crushers. Use this to your advantage. The next switch you need to flip is behind the west wall, which will allow you to flip the switch at the east wall. With these two switches flipped, the final switch is back near where the first switch was, except it is to the northwest of the teleporter. This switch will open the exit door at the top of the steps at the south end of the arena.

* The vertex count without the effect of node building is 6901.