MAP04: Midian Embassy is the fourth map of Midgard Outlaw. It was designed by Mike MacDee (Impie) and uses the music track "". The map contains the secret exit to MAP60: Harem. 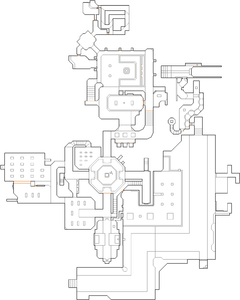 Map of Midian Embassy
Letters in italics refer to marked spots on the map. Sector, thing, and linedef numbers in boldface are secrets which count toward the end-of-level tally.

Upon reaching the embassy, Juno overhears radio chatter exposing the embassy staff as Commander Dawn's stooges. With the Norman Army waiting outside, her only recourse is to blaze through the embassy and hope she finds Drogo on the other side somewhere.

The embassy's front office is the scene of a massive opening firefight; several guards from elsewhere in the building will also join the fracas and attempt to box you in. Your main goal is the red door, which accesses the rooftop.

From the starting hallway, cross the large fountain room and turn right to find the elevator bank, another huge, lavish room, and an armory. Clear out this whole area, preferably from the upper floor so the Lancers can't fire at you from above. Be wary that ascending either staircase will trigger the elevator doors and bring Stepchild reinforcements to the melee. The upper balcony leads to a well-stocked bar and liquor cache (the latter guarded by a Vampire Matron), and a security booth with a switch. Hit the switch to reveal the yellow key, which triggers a Valraven aerial ambush when you grab it (and also releases two squads of Amazon Commandos in the fountain room). Take the key to the locked hall of records and kill everyone there for the red key.

Once you go onto the roof, you are ambushed by several Purgers, including several snipers on the roofs of nearby buildings. Drop back down to the streets via the air vent, and fend off a small army of baton-wielding thugs: beware the tank that comes rolling up the street just around the corner.

Near where you landed is a barricaded tunnel with an access lift to the sewers. Go down into the underground to find the subway train Drogo is boarding (careful that he doesn't shoot your head off). Hit the switch to exit the map.