MAP04: Nucleus is the fourth level of Eternal Doom and was designed by Sverre Kvernmo. You have entered the loading zone and it is filled with crates. Once you find the red key you descend back underground into a sewage treatment area. 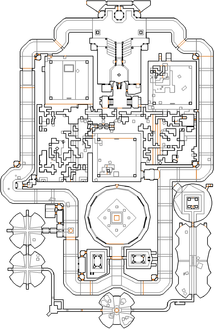 Map of Nucleus
Letters in italics refer to marked spots on the map. Sector, thing, and linedef numbers in boldface are secrets which count toward the end-of-level tally.

You can get the backpack and the chainsaw on this level.

In the northwestern loading bay, you'll see a flashing light. Shoot the wall behind it and press the switch. Then go left (to a medkit) which will lower several crates and allow you to progress into other parts of the level. The red key is obvious in loading bay 3; just climb the crates. To get the blue key, pass through the brown effluent downpour in a room off the underground tunnel (looks like a solid column but don't be fooled) and continue from there. For the yellow key, you must wait for the door into the narrow passage that leads to the key to close behind you, then flip the switch on that door. (Flipping the switch in front of you will just open the door you entered through again; the switch on each door opens the opposite door.) The exit is a teleport pad in the central, underground rotunda surrounded by green killer slime. To get to it, throw the switch on the rotunda wall opposite the entrance. You will like to have full life points for this.

There are at least four radiation suits that you can use in the green slime rotunda: One is behind the pillar down in the back. Three are in a room that you can reach by going into the tunnel to the west, taking the lift into a white tiled room, and proceeding to the next two rooms. In the last room, the switch on the island will open three radiation suit compartments. Although it is a long way back to the rotunda, you should be able to reach it with 30 seconds left before the suit wears out.

* The vertex count without the effect of node building is 3891.