MAP04: Outer Base is the fourth map of Community Chest. It was designed by Daniel Trim (Bad Bob), and originated as MAP01 of his 2002 WAD, Redux.wad. 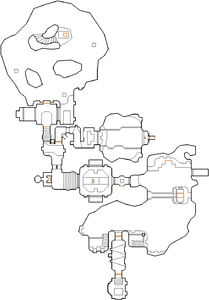 Map of Outer Base
Letters in italics refer to marked spots on the map. Sector numbers in boldface are secrets which count toward the end-of-level tally.

In Boom and other related ports, the middle texture obscuring a monster storage west of where you find the red key sinks partially into the floor.

One Spectre (thing 78) on the stairway up to the red key is immobile, due to being placed squarely on a linedef separating steps.

* The vertex count without the effect of node building is 990.