MAP04: Outpost 1024 is the fourth map of Congestion 1024. It was designed by Ian Cunnings (The Flange Peddler) and uses a MIDI rendition by Jay Reichard of the song "Quad Machine" from Quake II. 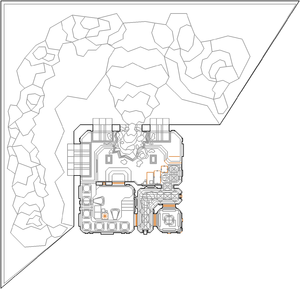 Map of Outpost 1024
Letters in italics refer to marked spots on the map. Sector numbers in boldface are secrets which count toward the end-of-level tally.

At the start, open the door to the left, then go through the door directly in front. Continue forward and go up the stairs to your right. Approach the rocky structure, hug the rock with the dead marine while facing the red key then run to the box to grab the red key. Face right, drop down and open the door. To the right of the entrance is a red switch, flip it twice to lower the box containing the blue key. Go up the stairs to pick up the blue key, then retrace your steps to the rocky structure but this time continue forward. Continue to the floating platform on your right and at the intersection press the red switch twice, which will reveal the yellow key to the right of the intersection. Go back to the starting room then use the blue and yellow switches to reveal the exit switch in the middle.

The doors back to the starting room don't open from the outside.

The yellow key is unreachable with default GZDoom, to be able to grab it, enable eg. "Boom" compatibility in Settings.

* The vertex count without the effect of node building is 1976.