MAP04: Phobopolis is the fourth map of Revolution!. It was designed by Thomas van der Velden (t.v.). When played with the Revolution! MIDI Pack, this level uses the music track "Westopolis," composed by Viscra Maelstrom. The track is based on the level of the same name in Shadow the Hedgehog. 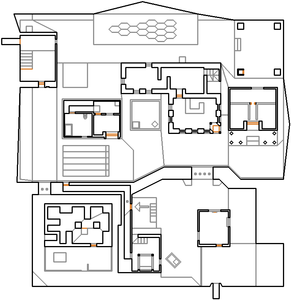 Map of Phobopolis
Letters in italics refer to marked spots on the map. Sector, thing, and linedef numbers in boldface are secrets which count toward the end-of-level tally.

* The vertex count without the effect of node building is 816.