MAP04: Polluted Paths is the fourth map of Community Chest 4. It was designed by Stuart Rynn (Forty-Two), who composed the music track "Few" specifically for this map. 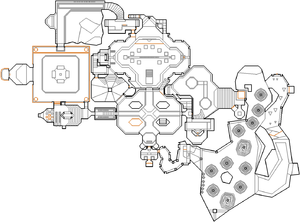 Map of Polluted Paths
Letters in italics refer to marked spots on the map. Sector, thing, and linedef numbers in boldface are secrets which count toward the end-of-level tally.

MAP04 of Community Chest 4 is a rather trap-oriented outing. While quite a lot of health is provided on this level, you're going to need it all - close-quarters encounters with overwhelming amounts of cannon fodder enemies are par for the course here.

This level has only one key - the red key. The west wing of the map is then progressed, followed by the eastern wing.

You begin in a grey, partially outdoor area. Grab the shotgun ahead and box of shells (three on Ultra-Violence and above). On Hey, not too rough and below, you get an armor as well. You don't have much time to get your bearings, though - this area has up to seven zombiemen and two shotgun guys who will begin chipping away at your health with their hitscan attacks. Even more zombiemen (up to eight) will also approach from the west. Clear them out and head north through the doorway.

Heading through the doorway will drop you into a large diamond-shaped chamber with multiple square pedestals on the floor. For now, your focus is on the two curved cages high in the east and west. Each cage has up to seven zombiemen (eight in the west cage) and two shotgun guys. Instead of clearing them out, quickly make your way to the red key in the north. Collecting it causes up to 12 imps to teleport in - one on top of each pedestal. Now, weave through the center of the room to cause the former humans in the cages to hit the imps, causing monster infighting. While they are busy, flip the newly-accessible switch in the east of the room to build steps up to the tall platform into the south. Run up the steps and off the tall platform to return to the semi-outdoor area.

From the partially outdoor area, head west. Go down the steps into a rectangular chamber (the zombiemen waiting in here headed out at the start of the level). As the passageway widens into a larger chamber with a hexagonal central pillar, look for a chaingunner facing away in an alcove to the right (north). Kill him and collect the backpack he was protecting. Head down another set of steps to the lower part of this larger chamber. Watch for five imps (and a revenant on Ultra-Violence and above).

Head through the red skull door in the northwest to reach a large square room with a walkway surrounding a central lava pit. On Ultra-Violence and above, you are supplied with an armor - you'll need it here. This room has up to four zombiemen, four shotgun guys, six imps and four demons, along with a revenant in the central structure. You don't have much firepower on board, so you might want to make your way for the chaingun (and the dropoff shaft) in the north of this room. As you approach the chaingun and pick it up, the dropoff shaft closes, and a trap opens in the west of this room. It has two demons and up to twelve imps. On Ultra-Violence and above, there are also two Hell knights. See if you can get the Hell knights to clean out the imps for you. When the coast is clear, head into this trap and flip the switch in its back to re-open the dropoff shaft in the north.

Jump into the dropoff shaft to find yourself in a grey L-shaped corridor adjacent to a caged-off outdoor area. The corridor has up to eight imps and three zombiemen, while the outdoor area has up to three cacodemons, two imps and a Hell knight. About halfway along the north-south arm of the corridor, look west for an alcove with a rocket launcher and four rockets (watch for the chaingunner on Ultra-Violence and above). Use this rocket launcher to clear out the outdoor area, then head up the steps in the northeast.

These steps take you to a tall rectangular room where you are attacked by up to six imps on three sides. Flip the lion switch panel to lower a platform in the southwest. Switch to your chaingun and ride it up. Mow down the former humans on the ledge, then follow the ledge to its eastern end. Flip the switch in the recess to lower a nearby platform, then ride the platform up.

Head down a short flight of steps to find up to three imps, then head down into a large irregular room with a pillar of lights in the center. Watch for up to eight imps, a demon and a Hell knight. Flip the switch in the east to lower a teleporter in the northwest, but be wary of the trap that opens nearby with three demons. Head through the teleporter to complete this wing.

The teleporter leads you to the barred-off alcove in the east of the partially outdoor area. Flip the switch in the east to open the bars, but watch for the imps to the north and two revenants (a spectre on Hey, not too rough and below) from a trap to the west. You might wish to retreat to the partially outdoor area for breathing room (and walls to stop revenant missiles).

From the alcove, head south. Watch for up to five imps on top of the nearby walls. Flip the switch in the alcove in the south to open a U-shaped corridor with two imps, two shotgun guys and a baron of Hell. Flip the switch at the bend in this corridor to lower a platform in the east. Ride this platform up, walk on top of the wall and head north down the steps into a new outdoor area. This area has up to four demons. On Hurt me plenty and above, two Hell knights appear, one under each octagonal structure. You will also have to watch for a revenant in the east. Grab the chainsaw in the northwest and save your ammo for later. Once ready to go, head east where the revenant came from and step onto the platform in the corner.

The platform lowers you into an underground mine. There's mostly cannon fodder here in the form of former humans, imps and demons, but on Ultra-Violence you'll find some nastier opposition mixed in: an arachnotron in the north, a Hell knight in the middle and a mancubus in the south. There's plenty of stimpacks and ammo here, so game your health and be liberal with your lead.

Head to the southeast of the mine to enter an open area with water. There are up to six imps ahead, but your main concern is the pack of up to four cacodemons and a lost soul descending from a raised alcove. Kill them and continue up the stone steps ahead. As you pass the halfway mark of the stone steps ahead, a large teleport trap activates, teleporting up to four demons, two Hell knights, two chaingunners and an arch-vile into pre-defined spots ahead. You should use your rockets now, and use the bend in the outdoor area to evade the arch-vile's attacks. Continue north and flip the switch at the end, then jump off to the west back into the first part of the mine.

Find the lit extension in the southwest of the mine and head into the narrow passageway ahead. Kill the zombieman in here and ride the platform to the right (north) up. At the top, watch for a zombieman in ambush. Continue along this grey corridor, watching for an imp and a pair of revenants (not on Hey, not too rough and below) near the end. In the dark chamber at the end, head south into the pair of teleporters.

This teleporter takes you to the eastern curved cage in the red key chamber. As you enter the cage, up to 12 shotgun guys will teleport onto the pedestals in the red key chamber. These hitscan enemies are far more dangerous than the imps, so mow them down as quickly as possible. Continue north and down an L-shaped flight of steps to find a Hell knight (Hey, not too rough and below) or a mancubus (Hurt me plenty and above).

Head west towards the exit alcove. However, there is one final teleport trap in the exit alcove. On Hurt me plenty and below, an imp teleports into the alcove as you approach - no big deal. On Ultra-Violence and above, you encounter the megawad's first arch-vile. Fortunately, the arch-vile is the one with the back against the wall, not you. Dispose of the enemy and flip the switch to exit the map.

* The vertex count without the effect of node building is 3148.

Some of the lights in the west and southeast of the level have a rather realistic "glow" effect where the light fades with distance. The effect is far simpler than it looks - concentric sectors have been drawn around the light source, and the light level is reduced linearly with each successive sector until it reaches the light level of the surrounding areas. The mottled patterns on the floors of both areas and large number of sectors over which the light gradient is simulated make it difficult to pick out the edges of each sector involved in this effect.

Candles cast glow on floor, but not ceiling

In the southwest of the mine, some candles cast a glow on the floor, but not the ceiling. This is achieved through a fake floor effect applied to the ceiling instead. The ceiling above the candles is extended upwards to +256 units, forming a tube with untextured sides. Due to the Doom engine's flood-fill algorithm for drawing flats, the surrounding dark ceiling is drawn in place of the untextured sides of the tube, producing the effect that the ceiling above the candles is at the same light level as the surrounding ceiling.