The player is sent here by Macil to find and destroy the power crystal, which will weaken the defences around the Order's castle. If the player accepted Governor Mourel's "bloody" chore earlier in the game, they are also sent here to find and kill a lackey named Derwin working in the neighboring warehouse. 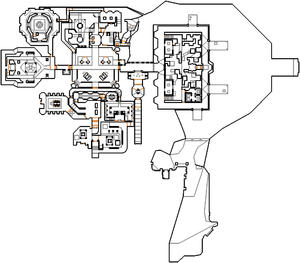 Map of Power Station
Letters in italics refer to marked spots on the map. Sector, thing, and linedef numbers in boldface are secrets.

Open the door in front of you, then head forward round a pillar and drop down to the floor below. You will arrive at a T-junction; turn right and go forward to reach the warehouse. Go left at the next junction and follow the path to a doorway on the right - go through to a room with acolytes and press the button to open the bars into the crate storage area. Leave the room and head around to the east side of the warehouse, then ride the lift here down to the crate area, and go forward between two fluorescent lights.

Go back to the lift and use it to leave the warehouse, then return to the T-junction you used earlier. Take the other path this time and press the switch by the large door ahead to open it. Pass through the door to a room with a T-shaped bridge, then turn right and enter a smaller door to find a mini-missile launcher in the acolyte's booth. Leave the booth and head south to a switch - throw it to raise the bridge ahead then follow the path and head south through a green doorway (this will set off the alarm, so be prepared for combat from here).

Turn left and follow the passage to a door, then go through it to see a switch ahead guarded by an acolyte. Flip the switch to lower some stairs to your right and head down them, following the path past two deep pits - do not fall in as they are instantly lethal. At the end of the path a lift will lower to your right, so ride it up and head straight forwards past an acolyte until you drop to the floor below. Turn left and then right to find a technician in the next room; kill the stalker which tries to ambush you and speak with the technician to get the Power2 Key.

Press the switch in the north-east corner of this room to lower some bars which are blocking a nearby lift, then ride the lift down to a room with another technician. Ignore him and turn left to go down a passage, climbing two steps to a door. Open the door and follow the corridor to get back to the room with the T-shaped bridge. From the bridge, head west to a large door and press the switch next to it to get the door open. In the next passage, take the environmental suits from the alcove to your left and activate one before pressing the button to open the next door, as the area beyond is radioactive. In the next room, turn right and head forward to enter the reactor core chamber. Head round to the north side of the gray structure to find a doorway into the core. Inside the core, lower the lift on the south side and ride it up to find Sammis - talk to him to get the Power3 Key. Throw both switches on the wall next to Sammis before leaving.

Leave the core and head south to return to the previous room. Head west across a bridge that should have risen, and follow either path to a button which will lower a lift when pressed. Ride the lift to the top to find Ketrick, but avoid talking to him as he will alert the guards if spoken to. Press the switch next to him to expose the power crystal, then fire a missile at it to destroy it (stand back as the explosion is lethal to anything nearby). Once this is done, return to the power station entrance to get back to town, watching out for any enemies that have been alerted by your actions.

The Veteran Edition added an achievement for finding the power crystal without setting off any alarms. This method minimises combat and allows much of the level to be skipped, but you will miss some pickups unless you visit the skipped areas later.

After getting the Power1 Key from Worner, climb back up to the walkway around the warehouse and go to its north side. Step onto the small pier here and go west across the water to a small opening in the rock wall, then climb up the waterfalls here. At the top, turn right and right again then press the switch here to open the bar blocking your way. In the next corridor, go forward down the steps and turn left, then go forward to a small balcony with railings. (Note the metal panel on your right that looks like a vent opening; you will need to use this later.)

Jump over the railings to land in the water below - on Veteran skill level or higher a sentinel may be alerted but you can ignore it. Jump up the ledges to the south to reach an octagonal water tank; press the button on the west side of the tank to lower a floor elsewhere in the level. Now go south-east into another water pool and head south through a small opening in the wall, then jump up the ledges to get on the T-shaped bridge. Look east to see a large door in front of you; open the door next to it, take the mini-missile launcher inside the booth and press the switch to unlock the large door. Go through it to return to the T-junction leading to the warehouse.

Retrace your steps to get back to the metal vent opening you passed earlier, and open it to find a small passage behind. Follow the passage until you ride a lift upwards, then turn left and destroy the sentinel here with the punch dagger before taking the environmental suit. Go forward and drop down a hole (you lowered the floor here by pressing the button on the water tank), then drop down another hole to find a door leading to the reactor core. Activate the environmental suit to protect you from radiation, then go through the door and head round to the north side of the core, ignoring any alerted sentinels. Inside the core, lower the lift on the south side and ride it up to find Sammis - talk to him to get the Power3 Key. Throw both switches here before leaving.

Leave the core and head south to enter the power crystal room. Head west across a bridge that should have risen, and follow either path to a button which will lower a lift when pressed. Ride the lift to the top to find Ketrick, but ignore him and press the switch next to him to expose the power crystal, which should unlock the achievement.

While speaking to Worner, he mentions a storeroom above him that you should investigate. After getting the Power2 Key and returning to the T-shaped bridge, stand in front of the large door to the reactor core and look north to see a green doorway leading to a staircase. Go up this staircase and head east past the water tank to another large door; press the switch next to the door to open it. In the next room, go down the stairs on the right and speak to the technician, who mentions that he has just finished logging new weapons, then kill him and take the gold key he drops. Return to the warehouse and head round to its south-west side, entering a room here with a button that lowers the forcefield to the storeroom. Go round to the storeroom door and open it with the gold key; you will find a variety of healing items, armor and ammo inside, along with one or more mini-missile launchers.

There are a number of items on top of the crates in the warehouse which can be reached by jumping. A tall crate on the west side of the storage area holds several items; jump on top of the nearby exploding barrel and use it to climb up the stepped crates to the top.

South of the T-bridge room is an area where you must follow a path past two instant-death pits. You will pass a large octagonal pillar as you do so; go round it and press a hidden switch on the north side of the tank, then continue following the path. At the end, look right to see two boxes of bullets and a med patch on a platform - jump over the pit to reach the items, then use a narrow ledge against the wall to get back to the path.

After getting the Power2 Key and heading into the next room to the north, speak to the technician here to learn that the Programmer has locked up the computer core, and the "suicide run" is the only way to access it. Head north-west to find a room with black tech walls and move towards the switch at the other end; when you do, the floor will fall away to leave only a narrow ledge, which is made even more dangerous by crushing ceilings. Press the switch to open a door nearby, then open the wall to the right to reveal an alcove containing different items depending on the chosen skill level.

After pressing the switch and escaping the suicide run, return to the technician and look south-west to find the door you just opened. Head down the passage here to the computer core and kill the acolytes on guard. Talk to the technician on the west side of the room, who explains that the coolant level will drop if the console locks up (if you break the screen then the pits in the power crystal room will rise, making that room easier to traverse). From this console, head east and jump into the computer core to find four energy pods inside (along with a Sigil E in multiplayer).