MAP04: Proving Grounds is the fourth map of 32in24-5, a deathmatch megawad. It was designed by Elric Sullivan (Fisk), detailed by Sarah Mancuso (esselfortium), and uses the music track "We Die Young" by Alice in Chains, sequenced to MIDI.

It was first of three layouts submitted by Sullivan, and the third submitted layout overall, arriving 50 minutes into the session. It was originally supposed to use a MIDI rendition of "My Spirit Will Go On" by DragonForce, but this MIDI was assigned to MAP21 instead. 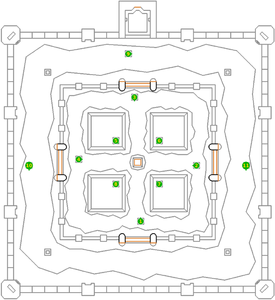 Map of Proving Grounds, cropped to only show the playable area 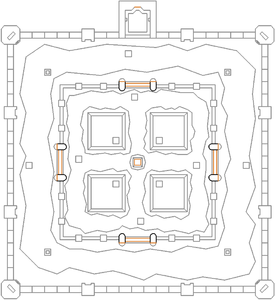 Map of Proving Grounds, cropped to only show the playable area

Proving Grounds takes place in a moderately-sized courtyard within a large fortress. The map is divided into two sections by a marble wall, which we can refer to as the inner courtyard and the outer courtyard.

Midway along each outer edge of the dividing wall is a door that opens to allow access to the inner courtyard as well a switch either side of the door that lowers the entire section of dividing wall next to it, for example, the switches to the west of the north door and to the north of the west door will lower the entire north-west corner wall. A green armor can be found on top of each corner of the wall. The wall behaves like a lift, so it will lower to ground level before returning to its original height a few seconds later.

The inner courtyard allows for a more close-quarters kind of combat. Vaguely reminiscent of Dead Simple, it features four square platforms surrounding the centre, and a tall column can be found at the centre, which can be lowered to take the rocket launcher on top of it.

This level contains eleven spawn points. A super shotgun can be found just in front of each spawn location.

* The vertex count without the effect of node building is 1177.