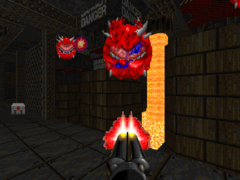 MAP04: Pyrolysis is the fourth map of UAC Ultra. It uses a music track "A Bad Feeling..." by Nick Baker which originally appeared on MAP41 of Crucified Dreams. 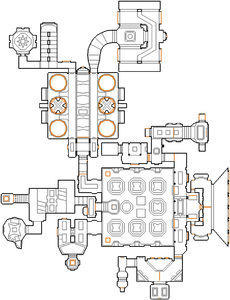 Map of Pyrolysis
Letters in italics refer to marked spots on the map. Sector, thing, and linedef numbers in boldface are secrets which count toward the end-of-level tally.

Open the door and proceed down the hall getting the super shotgun as you go. Flip the switch to open the next door, killing monsters while you go to it. The next room you come to has several crushers. The crushing ceilings indicated by the bold danger signs which are used to hinder the player later in the map can be utilized in combat. It is very effective to use the super shotgun to propel the cacodemons into the crushing ceilings. There is a chaingun nearby as well. Head through the door to the south. The wall in the next hallway will lower with enemies and a switch. This switch opens up more walls, with an arachnotron guarding the next switch. This switch lowers a lift with chaingunners on it. The next switch at the top opens up the door with more chaingunners guarding a teleporter.

The teleporter takes you to an open-aired area. Follow the hall you see, killing enemies as you head eastward, and you will see a pressure plate surrounded by the lava. An arch-vile appears just as you approach it, so quickly kill him. The plate opens the bars to another teleporter on the west side of this area, so head there now. The teleporter takes you back in front of the lava-filled sector with crusher platforms, with more cacodemons entering the area. Dispose of them, and look behind where you teleported to see another portal. Take this to the northwestern section of the map and follow the path. Keep going as you head through a large area with green tubes. Flip this switch, and go across the lift. If you keep going, you will eventually find a room with a rocket launcher, with several imps to kill upon grabbing it. Otherwise, take the lift up and go north, where Hell knights will block your way to the switch. After pressing it, the tubes go from green to red and several cacodemons appear. Kill them and head south. The next switch you press has the lift leading up to the crushers.

The crushing ceilings hanging over separated columns that the player must leap across is UAC Ultra's most grueling natural obstacle. The best way to get past it is to stand under the crushers as they are lowering, and leap across just before you get crushed so that you land on the edge of the next pillar after the crusher has gone below the players height to avoid getting caught under it. When you reach the other side, kill the imps, chaingunners (on Ultra-Violence or higher), revenants, and Hell knight. Then, flip the switch to reveal chaingunners and the exit.

An imp (Thing 468) has no flags set for any of the three difficulty classes, so it does not actually appear in the level. It was probably supposed to be set at Hey, not too rough and below, for at the same position is a revenant at Hurt me plenty and higher.

* The vertex count without the effect of node building is 2374.

The design of this map had taken step-by-step development in which almost every other room was either Jon Vail's mapping or Super Jamie's mapping. The two mappers repeatedly passed the map back and forth working on it bit by bit until it was a suitable length to give it an exit.