MAP04: Reluctant Pain is the fourth map of Hell Revealed II. It was designed by Jonas Feragen and uses the music track "Nyctophobia" by Sam Woodman. 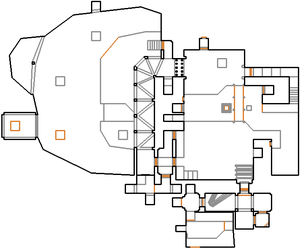 Map of Reluctant Pain
Letters in italics refer to marked spots on the map. Sector, thing, and linedef numbers in boldface are secrets which count toward the end-of-level tally.

There is a shotgun and a teleporter behind you. Take the teleporter to emerge on the right side of the map. Kill the enemies from where you are at, then climb the small set of steps to the west to get an armor. Hop the small gap and lower the metal wall. In the next tiny area, kill the chaingunners and hop the next gap. You will eventually find the yellow skull key; look out for the trap that triggers when you grab the key. Get out of there and jump down the gap you previously crossed, where there are rockets and two doors. Take the left one to appear on the terrace where the shotgun guys were (the same shotgun guys that you saw at the beginning). You will see the blue skull key outside, so jump out of the terrace and then jump to the pillar to pick it up. Another trap springs when you get the key, so kill the monsters, including the arch-viles, then return to the main area.

If you look just north of the teleporter without falling into the nukage, you will spy a rocket launcher to the east. Next to it is a blue skull marking. Open it and press the switch behind it to raise a bridge nearby. Since you have the yellow key, you can open the yellow door and hit the switch there. This raises a pillar on one side of the bridge, which has a soul sphere on it (if you did not pick it up already). The pillar also allows you to reach the red skull key as well, and to get there, take the door nearest the yellow door and go up the steps. Look west and run to get the key, but look out for the ambush that triggers. The red door is just south of the teleporter, open it and enter, being wary of a Hell knight ambush. Open the door to the west, kill the demon, and press the button to lower yourself into a trap with chaingunners. Press the next switch to lower again into another trap with shotgun guys and chaingunners. The last switch in this room is the exit switch.

When you go through the red door, you will trigger an ambush with three Hell knights in close quarters. Entering this small area also blockades your escape. If for some reason you want to head back, open either nearby door that leads to a small room with a berserk pack and a lost soul and hit the switch to lower the barrier.