MAP04: Rest of the Sages (Avactor)

MAP04: Rest of the Sages is the fourth map of Avactor. It was designed by Eradrop and uses the music track " ". The par time defined in the DEHACKED lump is 30:00. 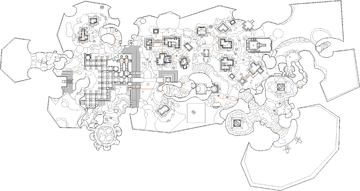 Map of Rest of the Sages
Letters in italics refer to marked spots on the map. Sector numbers in boldface are secrets which count toward the end-of-level tally.

From the start, head east to reach a temple courtyard. Head north through a minor detour to the first group of buildings. Grab the blue skull key from inside the west building. Return to the courtyard, activate the blue switch, and follow the path to another large outdoor area. Head north to the town and then east. A set of bars blocks off the rest of the town; open them with a bull switch in the south-eastern house. Continue east in the town; the eastmost building has the yellow skull key on a pillar. The switch to lower the pillar is found in the building directly southwest. Flip the switch, grab the key, and return to the second courtyard.

Activate the yellow skull switch and fight your way through the cave. You'll need to run across the pillars, then head east to a large circular lake. Head clockwise around the lake, hit the skull switch, and continue clockwise around to the exit. Climb the now-complete stairs and press the skull switch. The floors drop, joining the first temple courtyard. Head north and collect the plasma gun, opening an ambush to the east. Through that doorway, press the skull switch to raise the bridge in the second courtyard (and retract the bars blocking access). Head north to the bridge and cross to the other side where a teleporter whisks you away to the exit.

* The vertex count without the effect of node building is 17913.