MAP04: Seclusion is the fourth map of the megawad Alien Vendetta. It was designed by Mattias Berggren in spring 2000 and constructed with DETH. It was known as Seclution [sic] in the first release of the megawad. It uses a MIDI rendition of the second music track from the PC game Fire Fight by Janusz Pelc and Michal Doniec. The par time defined in the executable is 4:20. 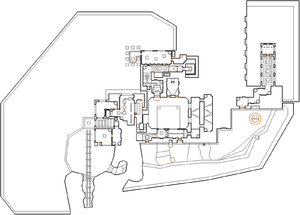 Map of Seclusion
Letters in italics refer to marked spots on the map. Sector, thing, and linedef numbers in boldface are secrets which count toward the end-of-level tally.

The secret directly to your right holds a super shotgun so get it. Now enter the building and go through each room, making sure to pick up the megaarmor along the way. When you reach a slender gray room (you can get Secret #2 here), press the switch here to open the door on the opposite side. Go down the steps to a large room with a nukage basin in the middle. Take the door just to the north of where you enter. This next hallway is filled with monsters, so be prepared to fight your way through here, and if you go far enough east, you may find another megaarmor and a computer area map. Take the next door in this hallway to another monster-filled room. The red key is to the west. However, picking it up surrounds you with several heavy weapon dudes. With the red key, head back to the room with the nukage basin. The two doors next to the one you came out of have red markings so use either door. In this monster-filled room, hit the switch here to open up a hallway to the east containing a lot of imps, followed by another hallway with other monsters. This particular hallway has a switch at the south end, which lowers a wall in the imps' hallway. Behind this passage is a cacodemon and a way to the room from the window. Open the door here to go back outside and head left. You will see a lone switch on a mound, hit it to raise a bridge near where you entered this outdoor area. Cross this bridge and reenter the building to find the yellow keycard, looking out for the monsters on the way back. Take the yellow door which is right next to the switch you pressed. This room has a large number of supplies in preparation for a big fight against a very large amount of monsters. As you are killing them, more will teleport into the room. Kill all of them, and kill the arch-vile guarding the exit. 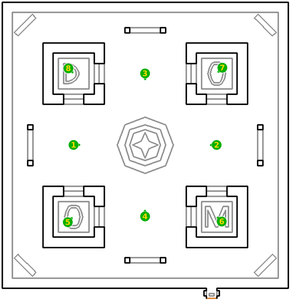