MAP04: Shotfun is the fourth map of the Newdoom Community Project. It was designed by Frades. 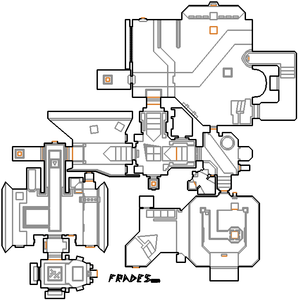 Map of Shotfun
Letters in italics refer to marked spots on the map. Sector, thing, and linedef numbers in boldface are secrets which count toward the end-of-level tally.

Although the exit switch is in front of you, you cannot access it. There is a different one you can access though, but you must go through the level to get it.

Turn north and use the door and proceed into a courtyard. The switch at the north end of the yard opens up paths on your sides. However, if you pick one side, the other one gets blocked off. You can elect to take the teleporter on your left, or move to the right, and both of them lead to the same room, with the blue key on a wall to the southeast and a pentagram symbol in the middle. Go to the eastern door and it will open, and then go south into the next room. In this donut-shaped area, there is a switch near the south which opens the way to the teleporter. Press it and enter. You will appear in a small room overlooking the eastern room you passed. A switch on the wall here lowers the red keycard. Go back in the teleporter, and you will have opened an area to the west with some revenants and demons. You cannot leave this place unless you press the switch in their area, and then press the previously barred switch in the donut-shaped room next to the door. Now go get the red key and use it on the door to the north.

In this big open area, step on the teleporter and a lift will lower. Ride it up and hit the switch to open the door in this place. Kill the zombies in this hall and press the switch to lower the yellow keycard. Now go back to the room with the pentagram symbol and go to the northern door which requires the yellow key. The switch at the end here opens a small room with a small teleporter. When you use it, you will be back at the pentagram room with the blue key now accessible, as well as a teleporter now open towards the south. Take both, and you will be back at the first courtyard. Move forward and you will see a switch to your left. Turn to it, but turn northeast and you will find another switch. This one lowers a lift up to the blue key door. Inside is a Hell knight and another switch lowering the bars behind you. This is another exit switch which you can use to leave the level.

* The vertex count without the effect of node building is 1702.