MAP04: Sol is the fourth map of Sunlust. It was designed by Zachary Stephens (Ribbiks) and Daniel Jakobsson (dannebubinga), and uses the music track "Desk Lamp" composed by Stuart Rynn. 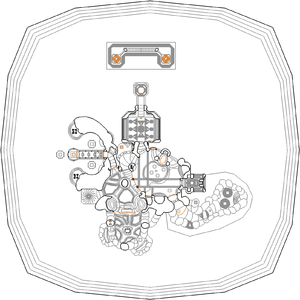 Map of Sol
Letters in italics refer to marked spots on the map. Sector numbers in boldface are secrets which count toward the end-of-level tally.

There are three keycards on the level. Each one can be found in any wanted order.

Take the shotgun and dispatch the imps in the room. Press the orange switch, and kill two sergeants to the left and right and one demon if present. Enter the ambush to the left of the orange switch in which one of the sergeants was and press the second orange switch. This will open two ambush rooms with enemies. Deal with them and press the third switch in one room. The metallic bar will lower letting you visit the whole level. Now, decide what key you wish to collect first.

From the starting position, head left (south). In the outside, descend down. Beware a trap behind you. When you reach the end, notice a metal block placed next to a red torch. It conceals a button, so walk around it and press that button. Force the spawned enemies while the rock with key is sinking. Take the red keycard when you can and backtrack to the central hall.

Head west from the starting position. In the west there is a cascade of lava in the middle of the room. Go around the cascade and face north. You will see a staircase. Go there. The blue card is just in front of you. Take it. A strange mechanism will start working, and the floor will lower. Press the switch on the rear of the raised platform. The mechanism works again but the floor will raise instead. An enemy group will spawn here. You may kill them or simply run away from (your main objective is complete).

Head west from the starting position. Go south from the lava cascade. There will be a room in which yellow key is visible. Go around central pillar. Kill a revenant/arch-vile and press the switch. Prepare to fight, as there are four ambushes. Two are right here in this room and another two are in the previous room where the lava cascade is. Recommendation: provoke an infight between arachnotrons, mancubi and revenants, so you will complete the objective faster.

Return to the room where you pressed the switch. Turn right (or left relatively to the pressed button) and enter the compartment where there were other enemies. Press the switch there and the key will be accessible. Walk around the central pillar and take the key.

When all keys are collected you are ready to complete the level. Go to the center of the map and face north. You will see a long panel with three switches. Each switch requires a respective key. Press all of them and the metal bars to the left will be unlocked allowing you to enter a subsequent room. The enemies in this room that wait on their own platforms will not be alerted until you press the only button in this room. Press this button (located in the other end of the room) and the bars ahead of you will start lowering. However, the monsters will be alerted. Kill them but be fast. Other monsters should appear soon in the room regardless whether you killed the previous ones or not. When the bars are finally lowered, you can step on the exit portal.

A light amplification visor (thing 92) is placed on the top of the rock in the "garden" area where red key is found. However, there is no way to reach it without cheating, so getting 100% items on the level is impossible.

* The vertex count without the effect of node building is 8033.