MAP04: The Church is the fourth map of Obituary. It was designed by Thomas Möller and uses the music track " ". 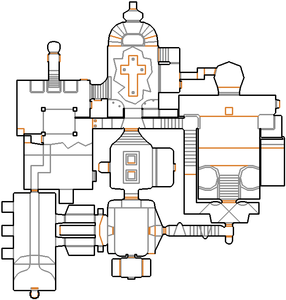 Map of The Church
Letters in italics refer to marked spots on the map. Sector, thing, and linedef numbers in boldface are secrets which count toward the end-of-level tally.

It is possible, albeit extremely rare, to get locked out of sector 52 (the alcove west of the chainsaw room) before flicking the mandatory switch on line 236. This is because the entrance to that area can only be opened once from the eastern side, where the player is, but the western side of the door is flagged as a monster-usable "open, wait and then close" door. If a monster triggers this line, the door will consequently shut, and if you haven't already entered the alcove, you will be unable to do so.