MAP04: The Focus is the fourth map of Doom II. It was designed by American McGee and uses the music track "Between Levels". The par time is 2:00. 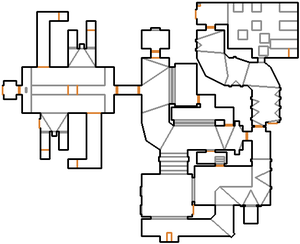 Map of The Focus
Letters in italics refer to marked spots on the map. Sector, thing, and linedef numbers in boldface are secrets which count toward the end-of-level tally.

Go through the door in front of you at the start of the level. In the next hall, go straight up the short staircase and flip the switch in the room at the top. This lowers the blue keycard later in the level. Return to the hallway and head to the other end and through the door. To the left is a locked blue door, so continue right along the path until you reach the blue keycard. After you've retrieved it, head back the way you came. On your way back, you will be ambushed by a group of imps from a newly opened closet. Head back to the blue door by continuing to follow the path or by going through secret #2.

On the other side of the blue door, flip the light switch next to the door if you like. Make your way to the end of the hall and through the next door. In the next room, stand on the small box in the corner near the door to cause a crate in the middle of the room to lower. Ride it back up to get the red keycard. Go through secret #3 for a shortcut back to the red key door near the beginning of the level.

Pass through the two red doors and walk along the walkway to get the yellow keycard. Be prepared, as you will be ambushed by several chaingunners when you pick it up. Drop down to the left side of the walkway you are on and follow the tunnel to a teleporter, and go through. When you reach the other side, flip the switch on the wall to raise the exit walkway. Go through the teleporter to your left to be teleported back onto the raised walkway. Go through the now-accessible yellow key door to the exit switch.

The back side of linedef 456 is missing an upper texture. This is not noticeable in vanilla Doom because it is obscured by crates, however in source ports that allow jumping or flying, it is clearly visible.

The floor of sector 10 (under the door around the bend at the start) features an incorrect flat: RROCK14 instead of SLIME15.

All of the wall lights on the walk way leading around to the blue key lack upper textures.

The trigger that opens the monster pen when you pick up the blue key is also mistakenly tagged to several other nearby sectors and hence causes their ceilings to raise when they probably shouldn't; the windows immediately behind the blue key and also the wall lights mentioned in the above bug.

A demon (Thing 65) in the south-east moat has no flags set for any of the three difficulty classes, so it does not actually appear in the level.

Not strictly a bug: The switch that turns off the lights in the corridor behind the blue key, switches the light level of the light sectors to 35 in spite that the surrounding light level is 80. This is because there are no switch line types in Doom II for changing the light level of a sector to the lightest or darkest adjacent sectors (only walk over versions).

With some skills, it is possible to reach the exit without raising the walkway that leads to the exit chamber. To do so, the player must strafe jump from the southern platform to the center one. It may take a few tries to accomplish.

The official French name of this level is Le Foyer.