MAP04: The Haunted Base (Selfish Series)

MAP04: The Haunted Base is the fourth map of Selfish Series. It was designed by Paul Corfiatis, with minor tweaks by Sam Woodman (Metabolist), and uses the music track "".

This map had been originally designed for the megawad Plutonia 2, but it was withdrawn from said project by Paul, due to its lack of progress, according to him. 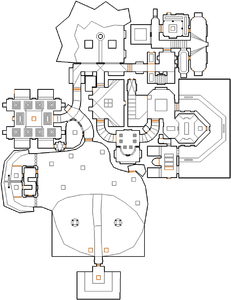 Map of The Haunted Base
Letters in italics refer to marked spots on the map. Sector, thing, and linedef numbers in boldface are secrets which count toward the end-of-level tally.