MAP04: The Terminal (also called The Siltyards) is the fourth map of Doom 2 the Way id Did. It was designed by Gus Knezevich (Alfonzo). The par time defined in the DEHACKED lump is 1:30. 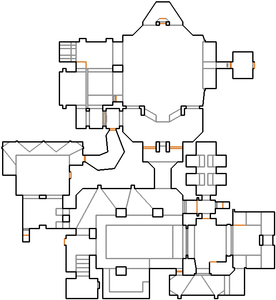 Map of The Terminal
Letters in italics refer to marked spots on the map. Sector, thing, and linedef numbers in boldface are secrets which count toward the end-of-level tally.

Walk up the staircase and press a button to your left to lower the lift (A). Go up by lift then go to any of the two alcoves and drop down. Come down on a staircase and press button to your right. Return and enter the newly opened room. Use the teleport pad and you will be spawned looking at small outside area. Go to your left to a newly opened place (B). Go to the door. It opens by itself as you come to it. Use the teleport. From a place where you have spawned go forth and make a jump run to another room. Pressing the button will raise a bridge leading to a blue keycard (C). It is optional to press it but is recommended because you can get back to the other side faster by walking on the bridge. Now, go to your right and jump off near the blue keycard or on the bridge. Go over the bridge to get to the other side or if you have not pressed that button use the lift at the starting area (A) to get to that side. Go to a place with two blue doors and a fence between them (D). Open any door. You are in a small cave (E). Now drop down and go forth to the button in the middle. Press it and several walls will open. Enter one of the two alcoves front of you. Get the red key or wait a lowering platform then get it. Go to the lowered wall between two fences at the top (F). Go forth, open the red keyed door and flip the switch to finish the level.