MAP04: Totenhaus, aka the Mansion map, is the fourth map of Ghoul School 3D. It is Barlow's post-WWI house, a dark and eerie manor crawling with rifle-toting Zombie Soldats. It was designed by Mike MacDee (Impie) and uses the music track "". 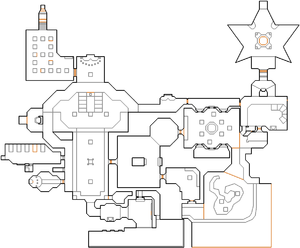 Map of Totenhaus
Letters in italics refer to marked spots on the map. Sector, thing, and linedef numbers in boldface are secrets which count toward the end-of-level tally.

Spike only needs to visit this map once. He has two objectives here: find the blue key, and find a way back to the present day. If you're polite to Horst the Ghoul Butler, he tells you that Captain Honeycutt knows how to access the key.

You'll find the blue key behind a strange barrier at the top of the stairs in the main hall. To the left is the library: a large room with a grid of tall bookcases. At the far end of the room stands a series of demonic doors that refuse to open.

A keen observer will notice that four bookcases have globes on the top shelf on one side (look at the top of each bookcase: if it has a globe, the trident decal points to the side it can be found on). Pushing the globe's side of a bookcase causes it to lower into the floor for ten seconds, and does the same to one of the four demonic doors. When all four doors/bookcases are lowered, Captain Honeycutt emerges from the room beyond and attacks you with a pistol. His appearance also gets rid of all unessential bookcases, leaving only the ones with the globes.

Once you pass the four doors, the final door opens to reveal a teleporter. Step through and you'll be taken back outside to the blue key, as the barrier lowers. Grab the key and Spike ponders how to get back to his own time.

Talk to Horst again and he'll mention that Barlow has an occult lab where you might find a way home. The door is difficult to open because of the impossible-to-reach switch barely visible behind a rusty grate.

At the center of the main hall you'll have noticed a strange raven artifact on a pedestal, out of Spike's reach. There is a matching door on the upper balcony: go through it and lower the statue (which was blocked by a similar barrier to that of the blue key). It lowers the pedestal and allows you to grab the artifact. Use it in the courtyard to turn into a raven and fly up to the switch you couldn't reach earlier: it opens the door to the occult lab. You'll have to damage yourself to turn back into a human.

Beyond the door is a demonic portal that is painful to the touch: if you try to enter, it demands more sacrificial offerings. Find all the chickens on the map and kill them: one in the portal room, one in a crawlspace by the raven artifact pedestal, one in the bedroom closet, one in the kitchen, and one on the fence outside. When all chickens are killed, the portal takes you back to MAP01: Tardy, but Not Dead.