MAP04: UAC Checkpoint is the fourth map of Community Chest 3. It was designed by Matthew Gilzinger (doom2day) and uses a modified version of the Doom music track "I Sawed the Demons." 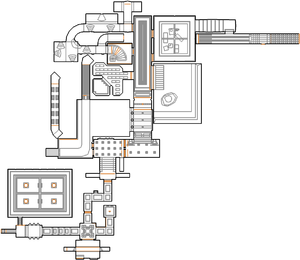 Map of UAC Checkpoint
Letters in italics refer to marked spots on the map. Sector, thing, and linedef numbers in boldface are secrets which count toward the end-of-level tally.

Shoot out the window of the building in front of you (to the east) using an impact weapon. Head through the now-broken window and approach the two doors to the east. Head through, and approach the northern switch; this will cause the wall in front of you to lower. Run north and press the switch in the middle of the west wall. Head down, and enter the tunnel just near the stairs to find a switch. Activate it, run west, and go through the corridor to the elevator. Activate it, and jump down to find a corridor with the yellow key at the end. Grab the key, head back up, and backtrack to where you shot out the window. Head downstairs and open the yellow door. Proceed through the hallway, open the next door, and head east. Press the switch in the pit to fill it and the pit to the west. Head south, and go west across the nukage pool. Press the western switch, kill or lead the baron of Hell out of the tunnel, and then press the next switch. Go through the northern door, and cross the narrow ledges in the center to get the red key. Exit the room, and backtrack to the north of the level. Open the red door, go through the passageway at the east of the next room, and enter the tunnel. Press the switch at the east of the tunnel, and head through the eastern doorway to exit the level.

The door into the building and the door at the north of the starting area both require the blue keycard. However, there is no blue keycard in the map. The doors thus cannot be opened in single-player, but can be opened in deathmatch (where players have all keys.) This is likely deliberate; there is a different method to enter the building, and the northern door opens into a tunnel leading directly to the exit. In the latter case, it is possibly intended to allow greater freedom of movement in deathmatch.

* The vertex count without the effect of node building is 3481.

This level was originally intended for an unreleased Ultimate Doom episode. This is reflected in the lack of Doom II items and enemies.