MAP04: Urinals is the fourth map of Erkattäññe. It was designed by Nicolas Monti and uses a rendition of the track "Lo Siento" by Belinda Peregrín, sequenced to MIDI by Nicolas Monti. 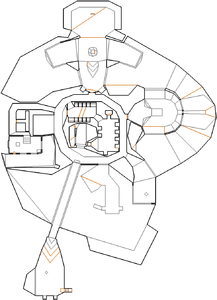 Map of Urinals
Letters in italics refer to marked spots on the map. Sector numbers in boldface are secrets which count toward the end-of-level tally.

Enter the building seen at the start. Inside take the chaingun and jump to the river and follow it until you come to the red door. Mind a spectre, however. If you want green armor and shotgun, head to the right. There will be a room to the left having green armor. Keep going down the tunnel, and you will see an opening to the right where the shotgun is. Go to the door eastward in any case. In the room ascend on the stairs and walk on the catwalk outside. Get the key and prepare for a fight behind two lowering walls.

Travel back to the red door to open it. Preparing to a chaingunners attack, go to the other end of the room. Fight everyone and enter the monster alcove to the left of the door. Push the button to reveal a sub-room. Go there and head to the right. Use the teleporter to get to a room where you should jump down to the yellow keycard.

Now, travel to the north side of the hub corridor and open the yellow door. Walk upstairs and go to the northernmost room. Push the switch to build the stairs around the pillar with the blue key. Walk up these stairs and get the keycard.

Return to the hub corridor and visit the southern room. Open the small door and flip a switch inside. Fight the enemies and go to the south long corridor that is open now. At the end is a tall room and the exit door. Open it, fight a Hell knight and finish.

A multiplayer-only BFG9000 (Thing 273) has no flags set for any of the three difficulty classes, so it does not actually appear in the level.

* In erkaknee.wad the count of radiation shielding suits is 17.