MAP04: Velvet Blood Mission is the fourth map of Stardate 20X7. It was designed by Zachary Stephens (Ribbiks) and uses the music track "Psylocke Theme," originally composed by Setsuo Yamamoto for X-Men: Mutant Apocalypse and arranged for MIDI by Stephens. The par time defined in the DEHACKED lump is 1:09. 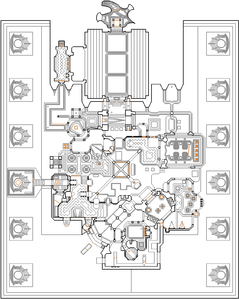 Map of Velvet Blood Mission
Letters in italics refer to marked spots on the map. Sector numbers in boldface are secrets which count toward the end-of-level tally.

* The vertex count without the effect of node building is 8985.