MAP04: Water Base is the fourth level of Kama Sutra. It was designed by Adolf Vojta and uses the music track "Taking Names" from Duke Nukem 3D by Robert Prince. It is way larger than the previous maps.

The very first map I made for doom2. You could see it looks older than most of the other ones, but I like it how it is so I decided not to remake it up to date. Just let it stay...I still think it's a good map. This map was inspirated [sic] by Chrozoron's map03 in HR2. 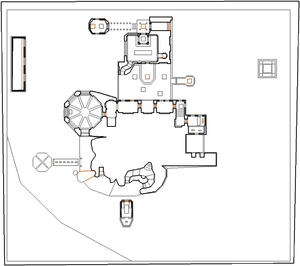 Map of Water Base
Letters in italics refer to marked spots on the map. Sector, thing, and linedef numbers in boldface are secrets which count toward the end-of-level tally.

Kill the imps at the start and walk down the only passage way there is. Outside, kill all the enemies in the area and enter a brown building across from the passage way. You'll soon come across a cobblestone wall that you can open. Kill all the imps in the new room and proceed outside. There will be several enemies on your way to the blue key, which you can find inside of a boat. When you enter the boat, a trap will issue behind you. Inside the trap is a teleport that will take you back to the start, which is where you want to go. However, several enemies have appeared while you were proceeding further through the map, and if you take the teleport you'll be surrounded; therefore, it's safer to simply walk back to the start and kill them. In any case, when you're back into the starting room, open the blue door and take the red key beyond it (again, be careful of a trap). With the red key, you can open a door in the brown area and a couple of more doors beyond it. You'll eventually come to an area with a switch. When you approach it, several imps will appear in front and behind you, so do your best to clean them out. Flipping the switch will lower the bars to the yellow key in the western area of the map. Go back to the cobblestone area, kill the imps again (an Arch-vile has resurrected some of them) and grab the yellow key at the end of the bridge (again, a trap will issue). Go back to the start, take the teleport there, open the red and the yellow bars and exit the level.