MAP04: Waterworld or Something (Mock 2: The Speed of Stupid)

MAP04: Waterworld or Something is the fourth map of Mock 2: The Speed of Stupid. It was designed by Tomi Rajala (Lu Wang) and uses the music track "Psycho Playground" by Tom White (Hyena). 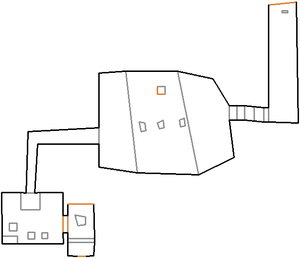 Map of Waterworld or Something
Letters in italics refer to marked spots on the map. Sector, thing, and linedef numbers in boldface are secrets which count toward the end-of-level tally.

Turn to your right and kill four zombiemen. Head into a room located to your west. In it lie two imps, a shotgun and three shellboxes. Kill the imps and press the switch seen to your left. This causes two mancubi to be revealed behind you. Either kill them, or quickly run out of the room. The switch causes a platform to lower, on which rest a super shotgun, a shellbox and a security armor. Go to the platform.

Inside a hallway beside the platform, five demons are seen; kill each of them. Outside of the hallway, three revenants and four Hell knights are seen. Kill all of them, and walk through three pillars (the middle pillar has a chaingun) to get to the other side. A hallway is seen; inside it are several chaingunners; kill them and run to the exit seen at the end of the hall. There are two ways to exit; either by killing a boss brain, or by pressing the switch seen behind said boss brain.

* The vertex count without the effect of node building is 94.