MAP04 is the fourth map of 2 Sectors. It was designed by Ian Cunnings (The Flange Peddler). 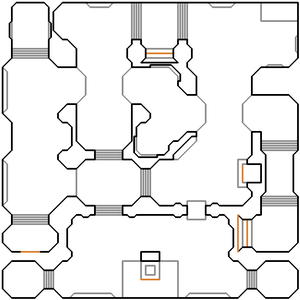 Take the shotgun in front of you and use it to kill the nearby zombiemen and shotgun guys, then head through the doorway in the north-west corner and head north past some more zombies until you reach a chaingun. Face east and kill a Hell knight guarding a fire wall, then step into this wall to be teleported to a platform near the starting point. Kill one or two imps (and a demon on Hurt Me Plenty (HMP) skill level or higher) then follow the platform north until you can run west to land on a second platform with more imps. Run west again to land on a third platform guarded by imps and a baron of Hell (as well as knights on HMP or higher) then head south and flip a switch at the end of the passage. This will lower all of the black platforms in the level, revealing an arch-vile to the east and allowing you to reach the exit switch by the south wall; quickly go to the south platform and flip the switch here to finish the level.

A super shotgun can be found in the north-east corner of the level.