MAP04 is the fourth map of Dystopia 3. It was designed by Anthony "Adelusion" Czerwonka and Iikka "Fingers" Keränen and uses the music track "Lunar Outpost" level theme (d_cent06) from Descent. 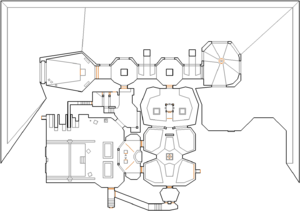 You begin in a small room. Grab the shotgun, box of shells and box of bullets, then head out the door to the north. This leads into a large room with multiple inescapable deep pits and a motley of cannon fodder - zombiemen, shotgun guys, imps and lost souls. On Ultra-Violence and above, you also need to be careful of two chaingunners, one on either side of the door you used to enter this large room.

Head north and around the tech wall. On Ultra-Violence and above, you have a chaingunner to take out. You will enter an area with a raised C-shaped walkway, some imps and a central structure blocked by a switch panel. As you approach the switch panel, a pillar on either side of the central structure will lower, revealing two cacodemons. Dispose of them and flip the switch.

Backtrack to the previous large room. The pit in the southeast corner has been raised, revealing up to four imps and a demon (Ultra-Violence and above only). The metal structure in the middle of the room has also disappeared, revealing two triangular blocks with a switch. These are part of a set of four switches required to unblock the central structure in the room in the north, of which two are still in the floor. Dispose of the enemies, then proceed to flip the switch on the southeast block (the northwest switch does not need to flipped unless going for 100% kills). This opens a small alcove with a switch in the southeast of the room. Shoot the switch in the alcove (approaching the alcove shuts it, and you have to flip the switch on the southeast block to open it again).

Head north to the area with the C-shaped walkway, and step into the central structure. It is a platform that lowers you to the lower part of this area. Watch for up to four demons, then go through the door ahead.

You are now in a semi-outdoor set of grey halls. As you step into it, you will find yourself harassed from all directions by various of former humans, as well as a number of lost souls. Your task is to head west to the western of two octagonal areas, then open the door in the south of this area. This next area must be taken slowly, or you will be caught in a deadly crossfire. There are zombiemen and shotgun guys on the floor, up to three imps in a cage ahead and a chaingunner or two on a raised platform to the right. There are also three barrels to the left of the door, positioned for the chaingunner on the platform to shoot and blow up when you enter, with three more further into the room. A suggested course of action is as follows:

In the "warehouse", your opposition mainly consists of former humans and lost souls. These hitscan enemies can be very dangerous in this open room, so head forward carefully. Make your way to the southwest section of the "warehouse", drop into the lowered part of the room and grab the blue key from its pedestal.

You now need to backtrack all the way back to the large room north of the starting room. (To lower the central structure in the room with the C-shaped walkway, look for the tiny button panels in its northern pillars.) You will see two blue doors, one in the northwest and one in the southwest of the room. Head through either blue door to enter a "control room" overlooking the "warehouse" area. This room has two invisible tripwires, one running northwest and one running southwest. Crossing either one activates a trap in the north or south of the room respectively. Each contains a shotgun guy, a cacodemon and a mancubus (Ultra-Violence and above only). To release a minimum of enemies:

Head back to the "warehouse". One of the pits in the floor in the east of the room will have risen up, revealing up to two cacodemons and two shotgun guys. Pick up the yellow key they were guarding.

Next, leave via the door in the north to return to the semi-outdoor grey halls. Head all the way east to a large room with a central pedestal containing the red key. As you approach the red key, the floor at the entrance to this large room raises up, blocking escape. Up to six cacodemons will begin teleporting in, with an extra two cacodemons and two shotgun guys teleporting near the door leading to the "warehouse" area. Flip the tiny switch on the north side of the red key pedestal to lower the raised floor, then make your way to the west. With a good standoff established, dealing with these enemies should be much easier.

Return to the "warehouse" area. Open the red door in the southeast. Up to three demons will attack. Kill them, head down the stairs and press use on the exit door to end the level.