MAP04 is the fourth map of Slugfest. It was designed by Shamus Young and uses the music track " ". 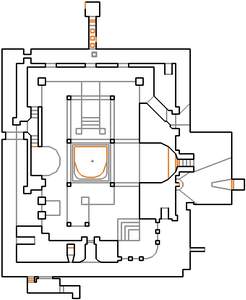 On hard skill there is an arachnotron (thing 21) stuck in a wall which is thus unable to warp in, making 100% kills impossible on this skill.

* The vertex count without the effect of node building is 474.