This is the fourth and final map of Suspended in Dusk. It was designed by Esa Repo (Espi) and uses the music track "Demons on the Prey". 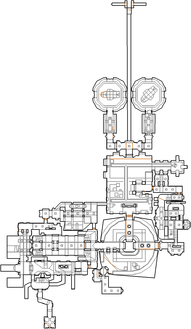 Take the path into the elevator, grabbing the super shotgun and flipping the switch to lower the elevator down to ground floor. Look out for the arch-vile who immediately comes in when you enter. Enter the western door to a hall with several ledges. Go all the way to the end where the rocket launcher is and take the northern steps, going east from there. Head through the next door and follow this path to a room of barrels. Keep going west, then south, until a ruined area with some sludge. You cannot get across it, so drop in and head southeast, through the tunnel here. Find the tunnel that goes south and grab the red keycard at the end here. As you head back, a tunnel with spectres has opened to the east. Go through this tunnel, through the red door back at the long hall with ledges, then exit this area back into the big room. Now take the red door to the north. Here is another big room with crates, but the blue key is just in the northwestern part of this room. Grab it and return to the other big room opening the blue door to the east. Enter and just follow the linear path all the way to the caged area in the other big room. Flip the switch here to remove the lasers blocking the path to the north. Now head back to this room. Going through the door triggers a cyberdemon directly in front of it. There is a fork here, where you should go left through the automatic door to a shuttle. Press on the shuttle window to exit.

* The vertex count without the effect of node building is 3216.