MAP05: 40 Days in the Desert is the fifth map of Preacher. It was designed by Darch, who also composed the level's music track "That Arabic One." 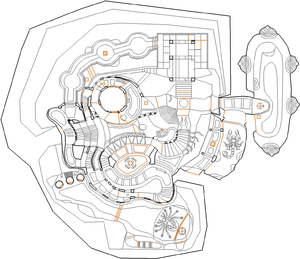 Map of 40 Days in the Desert
Letters in italics refer to marked spots on the map. Sector, thing, and linedef numbers in boldface are secrets which count toward the end-of-level tally.

At the start, turn around and go forward. Flip the switch to lower the teleporter ahead, then enter it. You'll be teleported to a random spot in the level, having to find all three keys. First, locate the T shaped platform roughly in the centre of the map. The yellow key is to the north of this platform, go forward and climb up the stairs to the right to collect it. The red key is to the west of the platform, go forward and approach the step to raise a circular platform with the key in its middle. The blue key is to the south of the platform, go down the stairs and take a left into a secluded alcove. As you enter it, the wall in front will lower, revealing the key. With all three keys, return to the platform and approach the east wall to make it lower. Make your way to the bars ahead and press the switch to the left to lower them. Enter the teleporter and follow the linear path to the exit switch.

* The vertex count without the effect of node building is 5516.